The semi-official bio: Jamie Kain grew up in and around Louisville, Kentucky and has since lived in too many places to count. She now calls Northern California home, where she lives with her husband, three children, and a pit bull mix named Reno who is her devoted writing partner (though he’s a terrible speller and not much better at typing). There are also a cat and two rabbits hanging around, but they mostly keep to themselves and have no interest in teen literature.

The unofficial bio: It’s really no fun to write in third person about oneself. Like I guess we’re supposed to all pretend someone else writes authors’ bios for them? Not true. It’s just us, writing as if we’re talking about someone else. 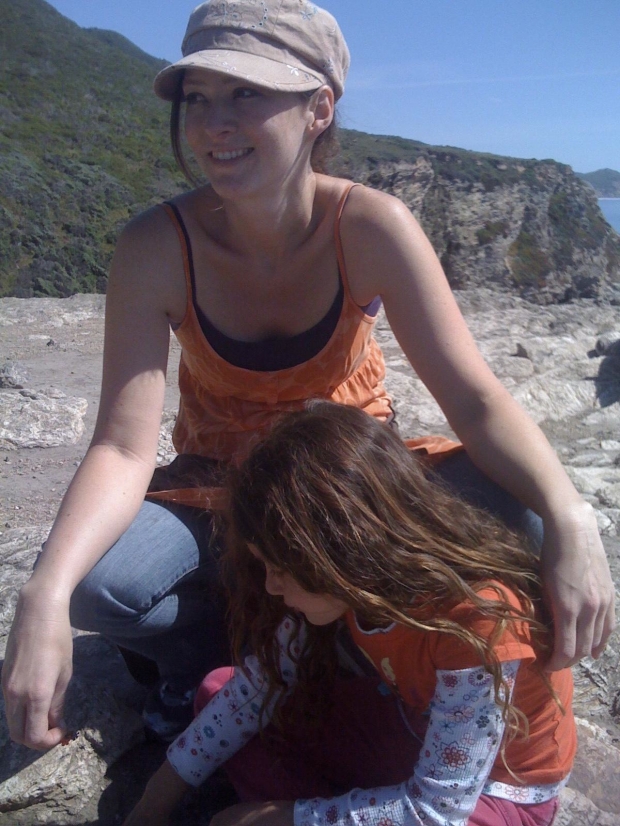 Above is a picture of me at Agate Beach in Bolinas, near where the final scene in The Good Sister takes place, with my daughter sometime around 2008. Bolinas, California is one of my favorite places, so it’s no surprise it showed up in the novel.

I grew up knowing I wanted to be a writer but not always daring to believe it was what you might call a real profession. I was assigned to write a poem in third grade, with a patriotism theme, and even though I wasn’t exactly the most patriotic 8-year-old around, I remember feeling for the first time the earth-shattering, all-consuming sensation of getting caught up in the creative process. My poem pretty much sucked, but I was hooked on writing from that point on.

The picture above is me, not too long before my I-want-to-be-a-writer epiphany, holding a giant slab of bologna. Why am I holding processed meat? My grandparents thought it would be a great photo. The owl in the background clearly doesn’t agree (nor did I).

Over the years, the creative writing assignments were few and far between, but they were among the rare joys I experienced in school, and by the time I was in high school, I went around telling myself I was going to be a writer someday. I worked at a variety of odd jobs during high school and college–everything from J Crew sweater-folding ninja to telemarketer to tech sales person–and after college I went on to become a writer and teacher.

In my spare time, I love to read, jog, work with shelter dogs, and learn new things. I also spent a lot of time shaping play dough with my youngest child and driving the older kids to their sports practices.

My favorite junk food is Coca-Cola, my favorite sort-of junk food is pizza, and my favorite TV show is The Simpsons, though everyone in my family thinks I’m lame because I can’t sit on the couch for 20 minutes to watch TV without falling asleep. My ideal day is one spent outside in nature, running, playing with our dog, and hanging out with my family.

Me, more recently, without bologna (photo by Allison Lal)